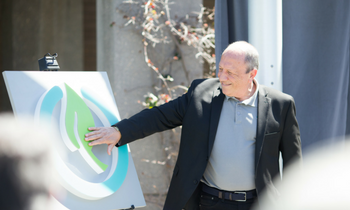 Board of Directors, cities and staff gather to to commemorate SVCE’s first official day of operation.

Cupertino, Calif. – The Silicon Valley Clean Energy (SVCE) board of directors and staff held a press conference in front of the Cupertino Community Hall to commemorate the first official day SVCE begins supplying carbon-free electricity to customers in Silicon Valley. More than 75 guests attended the event on Monday, April 3.

“Silicon Valley Clean Energy, by utilizing clean, renewable and carbon-free energy, reduces approximately one-quarter of our region’s carbon emissions from electricity use. This is a huge leap forward,” said Rob Rennie, Town of Los Gatos Vice Mayor and SVCE Board Chair, during his opening remarks.

“Silicon Valley has deep roots in innovation and leadership in helping solve some of the world’s most difficult problems and most challenging situations,” said Daniel Harney, Gilroy Councilmember and SVCE Board Vice Chair. “It only made sense for our communities to come together and be part of creating a community solution to the regional problem of carbon emissions that affects all of us, our children and grandchildren,” Harney continued.

“A little over eight years ago, the county did not have environmental stewardship goals; we did not have even one solar installation in the county. Eight years later, Santa Clara County is poised to be one of the top 10 governments in the country in terms of renewable energy production and consumption,” said Dave Cortese, President of the Santa Clara County Board of Supervisors and SVCE Director.

Bruce Karney, President of the Board of Directors of Carbon Free Silicon Valley, also spoke at the event as a member of the public who has been an active advocate for Community Choice Energy. Following the speakers, Tom Habashi, SVCE CEO, performed a symbolic “turning on the power” activity that wirelessly turned on an LED lit sign of the SVCE logo icon that was powered by a solar-charged battery.

Jeannie Bruins, City of Los Altos councilmember and SVCE Director served as the event emcee and ended the event with a summary of the impact SVCE will have on reducing carbon emissions. “As SVCE completes enrollment and assumes the role of providing carbon-free electricity to the grid, it will be sourcing 3600 gigawatt-hours to be consumed by our customers, and thus removing 1.2 billion pounds of carbon annually from electricity use, that is equivalent to taking 150,000 gas cars off the streets.”

Established by twelve local communities, SVCE is a Community Choice Energy agency chartered to provide new and competitive clean power options for local residential and commercial electricity customers. SVCE is responsible for electric generation, purchasing and building electricity supplies. The event celebrated SVCE becoming operational and supplying electricity to its first phase of customers, which are 20 percent of residential accounts, all small and medium commercial accounts and municipal accounts. All remaining customers will be enrolled in July 2017.

SVCE supplies carbon-free electricity from sources such as wind, solar and hydropower. PG&E continues to deliver electricity over existing power lines, maintain the lines, send bills and provide customer service. This provides customers with a great combination of the same electric service and reliability they’re used to, but with cleaner energy and lower rates.

Sourced from wind, solar, hydro and other carbon-free energy sources to meet the total annual demand of SVCE customers

Based on typical residential usage of 491 kWh under the E-TOUC rate schedule at current PG&E rates, and SVCE rates effective March 2022. Actual costs will vary depending on usage, location, rate schedule, and other factors. Estimate provided is an average of seasonal rates. PG&E renewable energy content as reported in the Annual Report to the California Energy Commission Power Source Disclosure Program in June 2021.

Based on typical small commercial usage of 1,851 kWh per month under the B-1 Time of Use rate schedule at current PG&E rates, and SVCE rates effective March 2022. Actual costs will vary depending on usage, location, rate schedule, and other factors. Estimate provided is an average of seasonal rates. PG&E renewable energy content as reported in the Annual Report to the California Energy Commission Power Source Disclosure Program in June 2021.

Based on large commercial monthly usage of 148,625 kWh per month and annual peak demand of 499 kW under the B19S rate schedule at current PG&E rates, and SVCE rates effective March 2022. Actual costs will vary depending on usage, location, rate schedule, and other factors. Estimate provided is an average of seasonal rates. PG&E renewable energy content as reported in the Annual Report to the California Energy Commission Power Source Disclosure Program in June 2021.

The California Public Utilities Commission does not classify large hydroelectric facilities as renewable energy sources, though hydroelectric power is classified as 100% carbon-free.

Are petroleum products responsible for most of the GHG emissions?

Californians are the second-largest consumer of petroleum products. In 2017, carbon dioxide (CO2) emissions from burning fossil fuels for energy are about 93% of total U.S. human-caused CO2 emissions.

Onshore wind and solar are now the cheapest sources of power generation in nearly all major economies in the world.

What contributes to GHGs in our community? Sourced from renewable wind and solar and carbon-free energy resources